"Where does it say that you have a contract with G-d to have an easy life?"

"Failure is not the enemy of success; it is its prerequisite."

All you can be

Parshas Acharei Mos/Kedoshim - Be All That You Can Be


Jewish Boxers and Wrestlers, and Yiddish Fighting Words, at Yivo Institute Exhibition
Posted by Devorah at 22:41 No comments:

The Lod District Court ruled Wednesday that a Jehovah's Witnesses baptism ceremony may take place on Saturday at the MetroWest Sports Center in Raanana. http://www.israelnationalnews.com/News/News.aspx/194794#.VUHb4iGqqko

Marco Rubio Makes the Case: Iran Deal Must Include Iranian Recognition of Israel’s Right to Exist

One of the more startling portions of oral arguments today at the Supreme Court was the willingness of the Obama administration’s Solicitor General Donald Verrilli, to admit that religious schools that affirm marriage as the union of a man and a woman may lose their non-profit tax-exempt status if marriage is redefined.
Read more: http://dailysignal.com/2015/04/28/obama-administration-says-non-profit-status-going-to-be-an-issue-for-religious-schools/?

A new iniative for Yom HaZikaron was reported by the Jewish Press.

The initiative was launched by Rabbi Ze’ev Rothman, a Chabad Rabbi, as an attempt to connect the two minutes of silence with an older Jewish tradition of saying Tehillim (Psalms) and prayers for the deceased.
http://www.jewishpress.com/news/breaking-news/chareidi-initiative-to-unite-moment-of-silence-with-silent-prayer/2015/04/22/

On July 28, 2014, the JC reported, 'Tesco, the UK’s largest supermarket chain, says it will no longer sell products originating from the West Bank, starting this September."
http://www.thejc.com/news/uk-news/120942/tesco-withdraws-west-bank-products


Why doesn't the left criticize Saudi Arabia for doing what they attack Israel for?
Posted by Devorah at 11:45 No comments:

To drop or not to drop

The Reconstructionist movement is on the cusp of making a historic decision about whether to drop its longstanding ban against intermarried rabbinical school students.
...Supporters of the change argue that the ban hews to an outdated way of defining Jewish identity and community, and that eliminating the ban would reaffirm Reconstructionism’s commitment to progressivism and inclusivity. http://www.jewishjournal.com/lifestyle/article/reconstructionists_consider_dropping_ban_on_intermarried_rabbis

A Tale of Two Heroes

The Jewish community are demanding answers over how a councillor was found not to be in breach of authority standards when he flew a Palestinian flag above the Civic Centre.
Read more: http://www.chroniclelive.co.uk/news/north-east-news/newcastle-jewish-barrister-demands-council-9092933
Posted by Devorah at 23:27 1 comment:

This morning I read an article in which Roseanne Barr is interviewed and where she admits, "“I have macular degeneration and glaucoma..."

Will the macular degeneration ultimately leave you blind, I ask.

Did I say the blessing of "pokeach ivrom" with the proper intent this morning? Probably not.

Incidentally, when asked about her views on Hillary Clinton running for the office if President, Roseanne responded, "I would rather see the first intelligent, honest American president."

For the Spanish speakers, below is a devar Torah about the parsha. 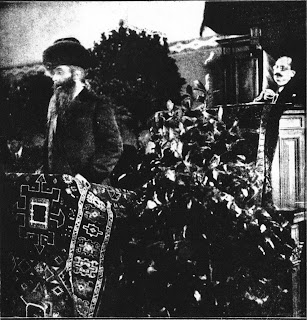 The 2nd of Iyar is the yahrzheit of Rav Yosef Nechemia Kornitzer. Click here to read a Torah thought form the Rav relating to the blessing of Borei Nefashos and empathy.

Turning to the GOP

Happy Birthday to a Great Country: Haaretz vs. the Meshech Chochmah

Why Many US Jews Are Turning to the GOP


TONIGHT: Event in NY to Mark Shloshim of Sassoon Children; List your Kabbalos to be Sent to the Family


In Parshas Tazria-Mitzora we find five kinds of tzoraas, skin, clothing, head, beard, and house. Rav Itzele Volozhin explains that tzoraas is an exterior sign of internal corruption. Each one of these nega'im correspond to a certain tumah within the person.

1. The tzoraas on the skin shows a constant craving by the person to satisfy his bodily desires with food and other physical pleasures.
2. A nega on his clothing is an indication of the pursuit of material items, whether new clothing or anything else. As soon as something new hits the market, says Rav Itzele, it's out with the old and in with the new.
3. Bad character, corrupt ideology, and haughtiness are plagues of the mind and show up as a nega on the head.
4. Sins of the mouth like Lashon Hara an Rechilus manifest themselves as tzoraas on the beard.
5. The chase after wealth such as real estate result in nega'im on ones house.

Everything is dealt with Mida Kneged Mida. Appropriately the cure for tzoraas is to go to the Kohen. The Kohen is an Ish Tzadik v'Tahor. He will take a deep look at the nega and understand its source. He will then prescribe the correct cure from your sins and help you cleanse your inside and as a result your outside.
http://revach.net/parshas-hashavua/quick-vort/Parshas-TazriaMitzora-Rav-Itzele-Volozhin-Five-Tzoraas-For-Five-Sins/4502

A NYT article reports on an American citizen, Mohamed Soltan, who was sentenced to life imprisonment in Egypt. The article also related in passing, "Gehad el-Haddad, a spokesman for the Muslim Brotherhood, was also sentenced to life in prison."
No other information is given in this article about Mr. el-Haddad.
An article at MadWorldNews gives further clarification about the individual. "El-Haddad served for five years as a top official in the Clinton foundation."
http://madworldnews.com/hillary-terrorist-ties-exposed/

Why did the NYT  decide to omit this piece of information regarding the man's ties to a Presidential candidate?

Additionally, the NYT article describes the calls of the State Department for the American citizen's release.

In a statement, the United States State Department said that it was “deeply disappointed” in the decision and “deeply concerned about Mr. Soltan’s health and detention.” The statement called for Egypt to release Mr. Soltan “on humanitarian grounds.”
http://www.nytimes.com/2015/04/12/world/middleeast/egyptian-court-sentences-us-citizen-to-life-in-prison.html?_r=0

What about releasing Jonathan Pollard on humanitarian grounds?

Greece: MP tweets about 'attacks of Jews against all of us"

Nazi invasion of London EXPOSED: World's top Holocaust deniers... filmed at secret race hate rally where Jews are referred to as the 'enemy'

D &  C has an article about a man named Bryan Morseman who has competed in a number of marathons to help raise medical costs for his son who has spina bifida. Last month he competed in three marathons and won them all.

..."you never know if you can do something unless you try," he said.
http://www.democratandchronicle.com/story/sports/columnist/2015/04/08/bryan-morseman-wins-marathons-days-son-spina-bifida/25450849/

MS HARF: Well, a couple points. Obviously, we have for a long time seen very offensive and disgusting anti-Israel, anti-Semitic remarks coming out from Iran’s leadership. And every time these kinds of remarks come out, we speak up as strongly as we possibly can against them. As I said, they are offensive and they’re disgusting and they have no place at all in any kind of dialogue, period. We’ve certainly made that crystal-clear, I think, every time. Again, I hadn’t seen the cartoon issue, but I take every opportunity I can to make clear how awful these are. http://www.state.gov/r/pa/prs/dpb/2015/04/240762.htm#IRAN

Hillary Clinton recently made an announcement about her Presidential candidacy in an official campaign video which didn't inspire me.

“Everyday Americans need a champion, and I want to be that champion.”

This morning I received an email with a Torah thought from Rabbi Yissocher Frand about Aharon not feeling worthy of taking up the tasks of Kohen Gadol. Moshe Rabbeinu also felt himself unworthy of assuming the role of leader of Bnei Yisrael. It is precisely because of their humility and feeling themselves unworthy that the two brothers were chosen for leadership roles.

Daniel Greenfield has an article titled The Deconstruction of Marriage. There are some interesting comments posted under the article including, "Everyone wants a wedding. No one wants a marriage."
http://sultanknish.blogspot.be/2015/04/the-deconstruction-of-marriage.html

MSN has an article titled 16 science-backed ways to be instantly happier.

Below is one way.

8. Say thank you. Your mum was right about this. While researchers know that materialism can make people miserable, gratitude can curb the effects, according to recent research. http://www.msn.com/en-gb/lifestyle/smart-living/16-science-backed-ways-to-be-instantly-happier/ar-AAaYEGd?ocid=MSN_UK_NL_FO35

"We Only Have What We Give"


Trevor Noah was interviewed in the Herald Sun in October 2014.

Your influences have been broad — your dad is a white European, your mum a black South African. Does that help a broad view? Oh, definitely. My mum doesn’t fit into any category, she’s a black South African woman who’s half Jewish.
http://www.heraldsun.com.au/entertainment/arts/trevor-noah-has-australia-laughing/story-fni0fcgk-1227096241477

At an event hosted by Brandeis Conservatives last Tuesday, TruthRevolt editor-in-chief Ben Shapiro gave students advice on how to combat the left.

Shapiro approached the subject by laying out the four principles of liberalism and then presenting conservatism’s counter-arguments. Shapiro explained that leftism was based on the following premises: 1) “equality of outcome is more important than equality of opportunity,” 2) “group justice is significantly more important than individual justice,” 3) “truth absolutely does not matter,” and 4) “force itself, when used in the service of these other things, is praiseworthy.”
Read more: http://www.truthrevolt.org/news/shapiro-speaks-brandeis-students-about-combating-leftism

Click here to listen to Ben Shapiro.
Posted by Devorah at 11:55 No comments:

All Comments
words of inspiration

"Mothers make a difference in their kids' lives. You believe in the kid, and he believes in himself for the rest of his life."

"My mission in life is to do everything I can to serve Hashem and to recognize the hashgacha in everything. We're in good hands because Hashem is taking care of us. Everything is really good."

by Esky Cook, professional artist and mother of six, including blind daughter

Devorah
wife, mother and teacher; someone who is trying to make a difference